Veganism has gone too far

A few years ago I made the change to being vegetarian but it was for health reasons. I was literally very sick and noticed it had a lot to do with the consumption of meat, so I gave it up.

I noticed my health improve, my mind was clearer and I had more energy. I had concerns if I was getting all the nutrients I needed, so I experimented further by adding some seafood. I seemed to be able to digest seafood quickly and it did not impact how I was feeling. So I became Pescatarian. It works for me. I don’t eat seafood all the time by the way, and I have not been able to digest dairy since I was a kid anyway.

One thing you might notice about my journey is that not once did I mention about joining rallies and protests and telling everybody I’m Vegetarian or Pescatarian. It was just something I did for me. My work colleagues took a while to notice and still only some know and that’s 3 years down the track.

I will never associate myself with a Vegan because they are politically motivated in everything they do. If they are not stealing farmers sheep and not interrupting cafes and restaurants from trading, they are probably blocking the meat section of your local supermarket.

Today’s twitter post has crossed the line for me, a post of a Dog with a sign attached saying “If I can be Vegan, so can you”. Okay, a Vegan Dog… Not to mention this is one sad looking dog who looks like he could do with a sausage right now.

I know Dogs, I have 3 Boxers and they are very communicative. There is no way in hell our dogs would accept being Vegan. My oldest dog who is a Bulldog x Boxer enjoys chicken nuggets for breakfast and loves chewing on the odd beef-bone.

I’m not going to change their diet away from meat because I don’t eat meat. They won’t understand that and it’s quite possibly cruel to take that away from them.

Veganism has gone too far and it’s having the opposite of the desired effect. If you attempt to ram veganism down peoples throats and use tactics like blocking the meat section of a supermarket telling people meat is murder, then you have a good chance that people will stay as carnivores and will have a huge problem with veganism.

Veganism should not be motivated by saving the world, there are a million things we can do to help save the environment, firstly stop mining and burning coal, use solar. Stop using plastics everywhere, get an electric vehicle instead of petrol. Walk when appropriate or use public transport rather than drive.

If you don’t want to stop eating meat then don’t. I would recommend that you look at lowering your consumption to a maximum of 75 grams per day, but that’s pure health motivated, not save the world motivated. 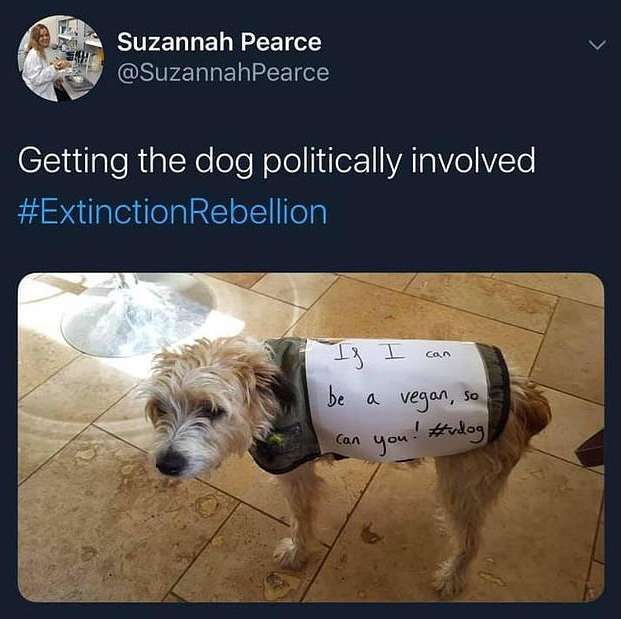