We’ve recently road tested plant-based meat from Unrealco. Sold at Woolworths for $5.30 for a 2 pack, it’s a bit of a bargain and may actually be an introductory offer.

The burger we tried is called the Italian Beefy Burger. We purchased hamburger buns, cheese, onion, BBQ Sauce and hit the kitchen for a cook up and taste test.

The plant-based meat pattie looks just like meat, the texture is so close it’s confusing. You cook the patties for 3 minutes a side and you are done. We melted some cheese on top of the patties and placed the patties into our burger buns.

Our first bite into the burger was just like any other meat burger, the pattie was even pink in the middle resembling a medium-rare cooked pattie. The issue that we did have is the unusual ‘Camphor Laurel’ taste that the burger has, I thought I was eating woodchips and that’s no exaggeration.

We’re going to give Unrealco credit for creating a burger pattie that replicates meat so well. But it’s questionable if this is something a vegetarian or vegan would be able to stomach.

I have been a vegetarian for 3 years now, and I can tell you that this pattie was a little too real, and yes my stomach churned on the thought that it was actually meat, additional to this the Camphor Laurel’ taste needs to be eased up a little.

I know meat eaters would eat this again, but for me as a vegetarian, no thanks. 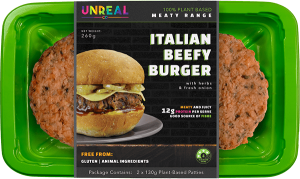