Out of sheer frustration and being tired of receiving burgers that were the equivalent to soggy diapers, this Chef walked in and showed Hungry Jacks how to make a proper burger.

We’ve visited Hungry Jacks multiple times over the years and it does not matter what store you go to, all Hungry Jacks restaurants have the same issue with their burgers. There is zero crunch factor, too much sauce, tasteless meat and it all ends up one hot mess that is a soggy diaper.

Recognised Chef Dan invited himself to a Hungry Jacks restaurant in Sydney and showed them how to do it right.

Chef Dan said “the biggest problem is the over saucing, take the Hungry Jacks cheeseburger, for example, it’s mostly bun, the meat is thin and soft, but on this is tomato sauce, mustard and mayonnaise, a thinly veiled slice of cheese, the end result is sauce pouring out of every bite and the texture soft and soggy, you’ve got 60 grams of sauce on a burger where the meat pattie is only 55 grams by itself.”

The first step was to halve the amount of sauce going on the burgers, the next would be to grill the burger on a traditional grill, not a gas flame broiler.

The idea behind grilling the meat is to give the meat some type of crunch, the introduction of a hashbrown on the burger was also an idea we played with and did give a satisfying crunch.

The next problem is that the burger buns are actually too large, Hungry Jacks are not filling these burgers with meat and salad as one might suspect, and leaving the extra space with nothing means a customer is going to feel ripped off, so they fill it with sauce. None the less, the bun to filling ratio is way off.

Chef Dan hopes Hungry Jacks take on board the suggested changes, but also said the meat, buns and hash browns used are of low quality.

People visiting Hungry Jacks can still get their burger a little more perfect by asking for half the sauce when ordering. 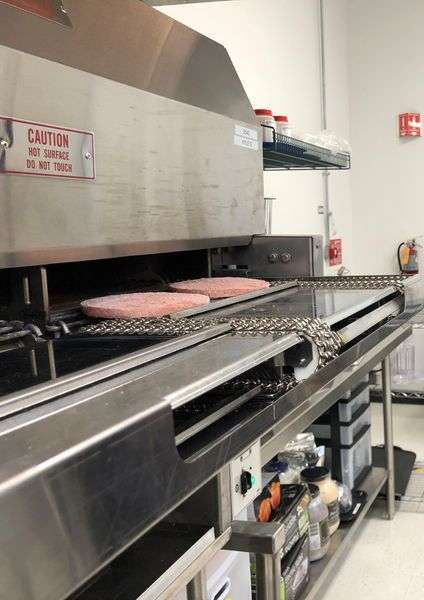