Sellers Beware PayPal are Now Withholding Sellers Money for up to 6 months with No Valid Reasons.

Dear Buyers, PayPal have stolen your money and have failed at the one thing they were asked to do, process a payment. No one asked for PayPal’s attitude and thoughts.

This article is based on real events that occurred during a recent transaction with PayPal.  I have been in the IT Business for over 20 years, I have a good reputation in the community and some pretty good prices. I don’t rip people off.

In September 2015 I decided to sell a few items on eBay to see how it goes. I created an account, listed some items and 7 days later the auction ended.

I then created a PayPal account and had the money paid into this account. 5 days later I withdrew the money and deposited into my bank account. It was all good.

At the beginning of November, I decided to list a few more items. I ran this on a 3-day auction, all items sold, but this time something did not seem to be right. Buyers took over 1 week to pay for their items, they also did not respond to my emails asking if they were still interested or should I relist.

After 1 week of no response people started paying, one particular individual emailed me saying that he would pay at midnight Thursday night. Sure enough, I had an email at midnight saying that it had been paid. 9 am Friday (the next morning 9 hours later) this person had raised a case with PayPal saying that he had not received his item yet and was sad.

I was extremely annoyed at this, because the person had not given me a chance to post the item yet, and that PayPal would even consider allowing a complaint within 9 hours of a person paying for the item. I know eBay does not allow complaints for the period 7 days which is fair and reasonable.

I contacted PayPal the following day to find out why the hold was still on my account. I was advised that they did not have the Tracking ID’s, I laughed and read them out to the service agent. I was then advised to wait another day for review.

Two days later nothing had changed so I called again, and was again advised that they did not have the Tracking ID’s, I once again read them to the agent.

Another day goes by with no change to my PayPal Account. I then hit their Facebook Page asking for a response. I then later received a private message from PayPal saying once again that they did not have the Tracking ID’s.

By now I’m beyond annoyed in their incompetence. I provided the tracking id’s in the private Facebook message, I then also messaged them in the PayPal Message Center and then called them all just to make sure they had the tracking numbers and that this was no longer the excuse.

So far PayPal service had been a joke and I felt like I was not getting anywhere. PayPal was refusing to close the case this person had opened despite the fact that the item had arrived.

I had to request the phone number for this person from eBay and then contact them asking for a response to the case that was open. PayPal had finally closed the case one day later but the hold remained on my account.

They were now requesting a receipt of where I purchased the items from, Identification and Proof of Address. All were provided within an hour of their request.

I was then advised by PayPal that it would take approx 72 hours or more to review. Five days pass and I contact them again, only to find out that they have decided to close my account.

I said GREAT! because I really do not want to be dealing with such an unethical, incompetent company anyway. I had not done anything wrong, the case was closed with no fault on my behalf I had responded and answered every question they asked.

I then asked them to release the money today since the account was being closed. Their response was:

We are not going to be releasing the money ($1400 AUD) to you for 180 days (that’s 6 months). I advised that there is NO WAY I will allow them to hold on to my money for 6 months when the customers had already received their items and are already using them.

PayPal is holding on to my money because they believe the customer can ask for a refund up until 6 months, which is not true. The products sold have a 5-year manufacturers warranty, and any fault with this product simply means entering the serial number in on their website and obtaining a replacement.

These are the normal steps that any computer store follows, yes I will honor a 7-day money back, but after that please see the manufacturer.

So why does PayPal think they can dictate the sale conditions of my business without understanding the Product, Industry, and the warranty terms.

Today I’m asking Business and Individual Sellers everywhere to beware of PayPal, to think about using PIN Payments and Paymate to process credit card transactions before accepting PayPal as payment.

As a business we’re now in a position of a simple FACT, I have not been paid for the merchandise that these customers are using and this now puts the buyer at risk.

PayPal has taken the buyers money and not given this to the seller once goods were received. I am now in a position of advising my customers that I have not been paid and that they should seek their money back from PayPal and make other arrangements to pay for the merchandise or risk being followed up by debt collectors.

Dear Buyers, PayPal have stolen your money and have failed at the one thing they were asked to do, process a payment. No one asked for PayPal’s attitude and thoughts. 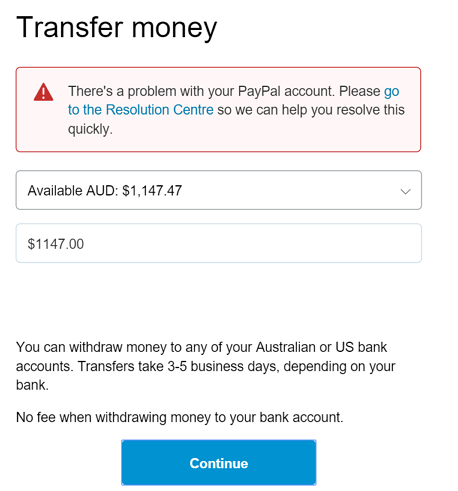 The customers who purchased the items from us did not pay by credit card, they paid by funds transfer. The 180 days to lodge a refund only applies to credit cards. So in actual fact PayPal had no right to hold on to money that was not theirs.

Despite many thinking, it’s a safe way to buy and sell, it’s not. As a business, we will never use them again. We’ve been burnt using them and we’re now warning others to simply DO NOT USE.

It’s been great, we continue to sell at great volumes and the people who ask to buy using Paypal we simply say sorry we don’t accept Paypal. If they want to know why we refer them to the numerous articles on the internet about Paypal being unethical.

We don’t even recognise Paypal as a currency or way of paying and receiving money.

Dear Buyers, PayPal have stolen your money and have failed at the one thing they were asked to do, process a payment. No one asked for PayPal's attitude and thoughts.
1

Dear Buyers, PayPal have stolen your money and have failed at the one thing they were asked to do, process a payment. No one asked for PayPal's attitude and thoughts.