The Surface Go might be the most useful tablet we’ve come across with ample laptop imitation skills, decent enough media prowess, excellent sound, Windows Hello (Facial recognition), a front facing camera that puts the latest iPad’s to shame, and the necessary Type Pad accessory which is going to transform this tablet into the PC you didn’t know you needed.

Weighing just over 500g, with a 10in screen it’s almost like a shrunken Surface Pro with kickstand and all.

The kickstand flexes almost a whole 180 degrees and when it’s down flat, it’s completely flush and you wouldn’t know it was there. You can stand it up at varying angles depending on whether you’re using it to draw with the Surface Pen, stream Netflix or even finish that PowerPoint document before getting into work.

The Pro looks like a ‘friendlier’ Surface Pro, with more rounded edges, yet still simple and smart.

The bezels are huge! But you’ll only be grabbing the edges with your fingers anyway, so it didn’t really bother me, plus the 10in screen is big enough for a tablet.

Underneath the kickstand is hiding a microSD card reader, this can be used to expand storage and also to read media. I personally used it for scrolling through pictures taken on a DSLR and showing my friends a load of holiday pics. That’s where a tablet really shines, when it’s used as a show and tell slab.

As well as a main charging port, there’s also a USB-C port which is always a bonus. The iPad has neither of these features. The 5MP front-facing camera is surprisingly brilliant – you’ll be the brightest member on the webchat. And the 8MP rear camera focuses well and is decent enough.

The Type Cover and Surface Pen don’t come in the box, but we’d say the keyboard is a must-have to make the Surface Go all the way. It can also be used as a screen cover when not in use.

It’s housing an Intel Pentium Gold Processor so will cope with basic tasks such as web-browsing, managing your influx of emails on the Outlook app or whatever email client you use (in browser), as well as the Office suite apps which come as default. You can do all this while blasting out a bit of Abba Gold on Spotify.

On the higher end model, there’s 8GM of RAM which’ll let you take it that extra mile should you be a multi-tasking maverick.

Where does it fall short? Firstly video editing is not really possible. It’s a low-performance machine and in no way contends with any of the more capable configurations of the Surface Pro or even the iPad for that matter. But despite this, I was pleasantly surprised with how well it coped with a days work of CMS editing, frenzied web browsing (I’m the worst for this), note-taking, Netflix binging and WhatsApping.

Trying to edit huge photos with Affinity Photo, whilst it did work, it wasn’t fun or fast, don’t do that. Microsoft’s paint 3D tools are cool to play with if you’re looking to be creative with your Go. That’s because the CPU inside uses Intel’s HD Graphics 615 which is similar to the innards some gaming laptops. 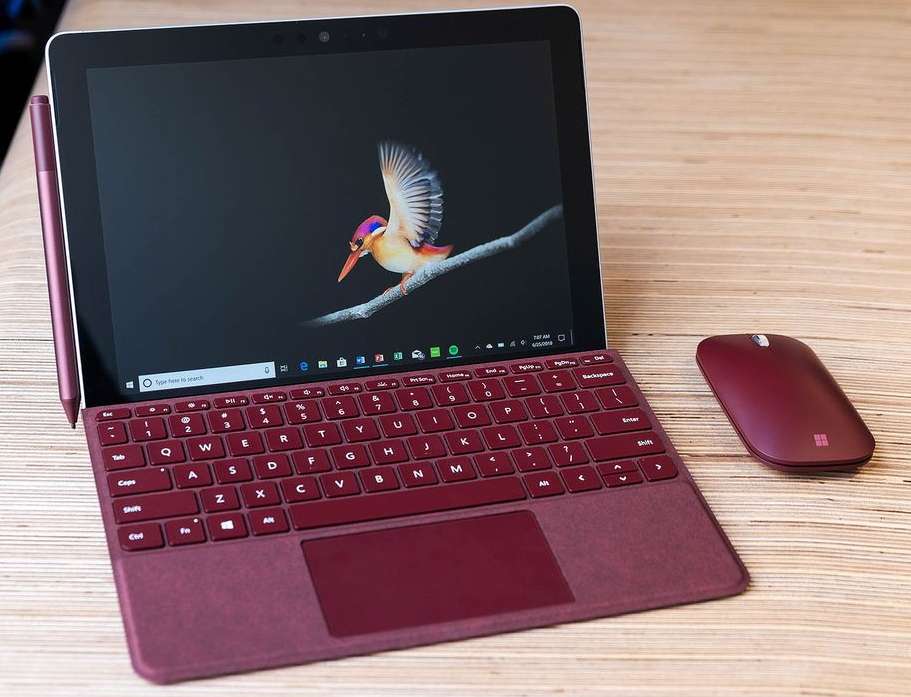