Jimmy G’s Cafe has a range of Cafes and Espresso Bars across the Central Coast.

Their food is a blend of modern cafe dining with flavour inspiration from Italy, South America and Australia. Our Cafes and Espresso Bars offer a range of pasta, salads, sandwiches and wraps, cakes and sweets, as well as a seasonal A La Carte menu for breakfast and lunch.

We’ve revisited Jimmy G’s, while not a lot has changed in regards to the food, however, service and attitude were poor.

We arrived on a Saturday at 12:10 PM and ordered 3x Barramundi burgers, they come with a good serving of steak-style fries which makes up a main part of the dish. It’s $15.50 for the Barramundi burger.

One of the people we were with has an allergy to pork so while ordering we told them this, they offered to cook the Barramundi in a separate pan. Great.

After paying and sitting down, a waitress passed by and said that we will not be able to have the fries because they cook Bacon in the deep fryer. We appreciate that they thought of this, but no substitute was offered.

We end up receiving a small burger with a small piece of Barramundi and a little bit of slaw for our $15.50. It resembled the McDonalds Fillet O Fish, a complete fucking rip off considering we can go to many places and get a whole lot more than a tiny burger for $15.50.

It was only when I said we were going to cancel the order and go to Rashays Tuggerah for the same money that they refunded $3 per Barramundi burger. With this attitude, we will not be back.

Yeh, you might see this as having a sook over fries, but you know what. When the portion of fries is the main thing on a plate and the burger becomes the side dish it is a big part of your meal.

Are we going to stand around and get fucked over or are we going to take a stand and say fucking hell no? Go to Rashays and for the same $15.50 you are going to get a full meal that is eatable. Why should I walk away with my tail between my legs and still hungry after spending $15.50. For the same price you can get 3x Fillet O Fish burgers and YES the taste is comparable.

On Saturday at midday, we gave Jimmy G’s at West Gosford a try out for lunch. Upon arriving we were politely greeted.

We took some menus and found a place to sit. Jimmy G’s had a good amount of customers sitting and happily eating. Overall not too busy.

Our order was taken smoothly without issue, 10 minutes later the waitress re-appeared again saying that they do not have any Cinnamon for the Doughnuts and that we would need to order something else.

We ordered the Buttermilk Waffles with vanilla ice-cream, berries & maple syrup at $12.00 instead. 20 minutes later our food arrived.

The Fish Tacos were simply excellent, fresh and looked very vibrant. It was however not a perfect dish.

The Mango pieces were semi-frozen, the fish lacked any flavour as the slaw overpowered. There was also too much red onion.  The portion control was great, with 3x Tacos.

The Vegetarian Nachos was hearty and full of flavour. However, the portion was a little too large for one person.

The Buttermilk Waffles with vanilla ice cream, berries and maple syrup was also a great dish but had flaws.

The fruit was still semi-frozen, the waffles are a soft style waffle, which is disappointing as they become soggy very quickly with ice cream. The portion control here was also good not being too large.

As we were about to leave, the Chef brought out the Breakfast Doughnuts. Housemade doughnut balls with preserved cherries & ice-cream.

We were confused and thought the kitchen had made a mistake. They explained that they wanted us to try them.

We did and they were amazing. Something so great we went back on Sunday. If you are at Jimmy G’s you really need to try these Yum Balls. We left full, after eating surprisingly great food.

Sunday we arrived at midday and ordered the Housemade buttermilk waffles with fried chicken, white pepper gravy & shallots at $14.50. This is an American favourite that we’ve not tried before.

Waffles and fried chicken work wonders together. What let this dish down was the soft waffle (more like a pancake batter) and the floury bechamel sauce.

You could feel the grit and flour when running this on the top of your mouth. Overall the Waffles and fried chicken lacked flavour and tasted rather milky from the bechamel. We would not order this again.

However, the housemade doughnut balls with preserved cherries & ice-cream were simply amazing again!

The Chef cares about the food he is making, not everything is excellent but most things are great. The staff used to have a good attitude towards the customer. Our experience left us wondering what happened and why the big decline in service quality.

We’ve reached out to Jimmy G’s about our experience and there has been no response, so we can safely assume they do not give a shit either. 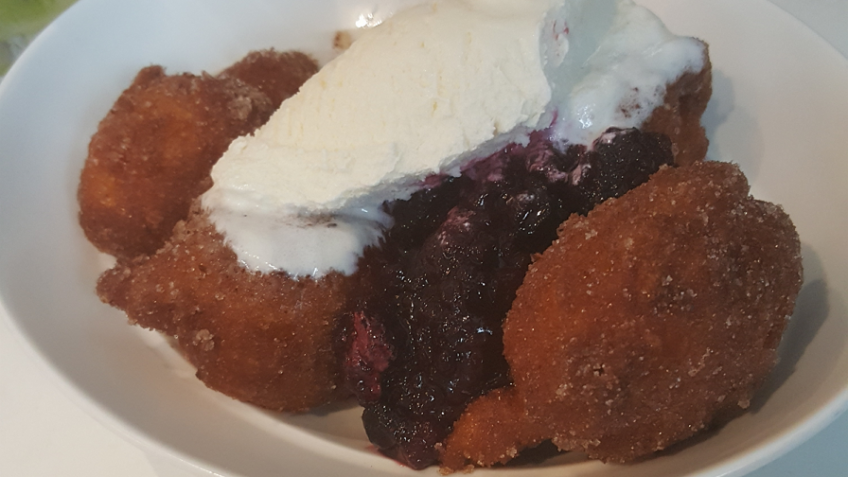 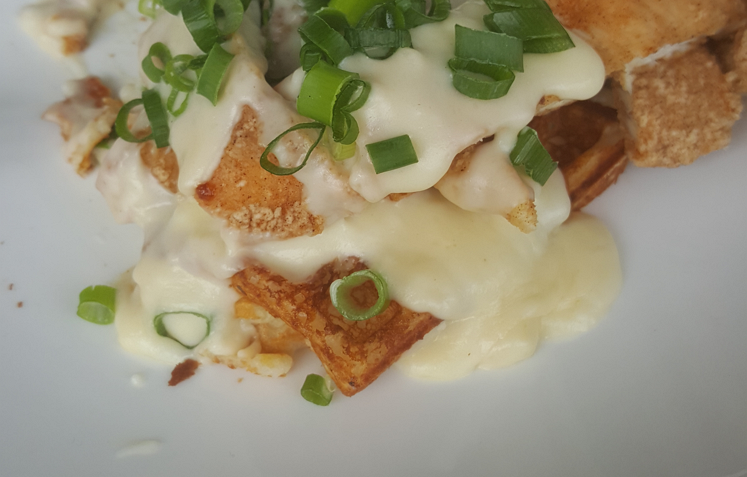